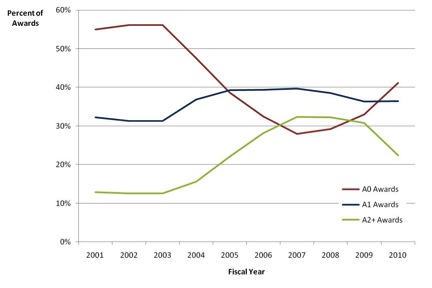 Once upon a time, one was allowed three submissions on an NIH grant application—your initial submission (A0), and two resubmissions after review (A1 and A2). In January 2009 NIH did away with the second resubmission, giving rise to what the scientific community not-so-fondly dubbed the “Two Strikes You’re Out” rule. This policy was instituted under the leadership of previous NIH Director Elias Zerhouni as part of the effort to Enhance Peer Review. The goal was to fund the best science in the shortest time period possible.

So two years out, how successful has this policy been? Today NIH released a letter it composed in response to one it received from members of the scientific community. Before the policy went into effect, funding for A0s had dropped dramatically, despite the fact that applications that initially scored in the top 20% were eventually funded (they went on to be funded as A1s and A2s after having to wait 1-2 years.) This trend appears to have reversed: The proportion of funded A1 applications has remained constant while the proportion of funded A0s has increased dramatically. The NIH letter goes on to supply data demonstrating that the policy has not had a negative effect on R01 funding for New and Early Stage Investigators. Read more, and if you haven’t already subscribed to NIH Deputy Director Sally Rockey’s blog “Rock Talk”, I highly recommend you do so.